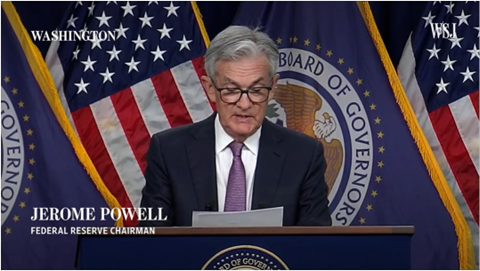 By year’s end, officials predict short-term rates will be above 4.25 percent, and they anticipate further significant rises at next meetings.

WASHINGTON— The Federal Reserve approved a raise in interest rates of 0.75 percentage points for the third time in a row and suggested further significant increases were inevitable, despite the fact that doing so increased the likelihood of a recession.

The benchmark federal funds rate was last increased by the Federal Reserve to a range between 3% and 3.25% in early 2008. According to updated forecasts provided on Wednesday, almost all of them anticipate raising rates to between 4% and 4.5% by the end of this year, which would need substantial rate increases at policy meetings in November and December.

“We have got to get inflation behind us. I wish there were a painless way to do that. There isn’t,” Fed Chairman Jerome Powell said at a news conference after the rate decision.

The stock markets fell after a choppy trading day. The S&P 500 index as a whole decreased 66 points, or 1.7%, to 3789.93. The two-year U.S. Treasury note yield According to Tradeweb, the Treasury note finished around 3.993% from 3.962% on Tuesday, which is almost a 15-year high. Immediately following the Fed’s statement, it reached a peak of 4.12%. In the meantime, longer-term Treasury yields decreased because rising rates could cause an even more severe economic downturn.

Officials predicted that rate increases would continue until 2023, with the majority predicting that the fed-funds rate would stabilize at 4.6% by the end of the following year. That was more than the 3.8% that they had anticipated in June.

Analysts said they hadn’t expected the Fed to show quite so high an endpoint for the rate. Given how persistently elevated inflation has been, “I wouldn’t be surprised to see them go even higher than what they’ve written down—say, to 5%,” said Ellen Meade, an economist at Duke University who is a former senior adviser at the Fed.

The predictions for what might occur after next year indicated a wide range. A third of officials believe that the fed funds rate will remain at 4% until 2024, while others believe that rate reductions will continue.

“There is a message here that rates will stay higher for longer, and this message is really sticking with market participants,” said Blerina Uruci, U.S. economist at T. Rowe Price.

Even though the economy isn’t yet showing the full effects of Fed rate increases, “all of this volatility and uncertainty makes it hard for businesses to make plans. There are some benefits to having this hiking of interest rates over and done with sooner,” she said.

The Federal Reserve was buying mortgage-backed and Treasury securities a year ago, indicating that rates might remain at zero for an additional year. The strength of the economy’s recovery from the pandemic and the rate of inflation’s increase were both underestimated by officials.

They have authorized rate rises at five straight policy meetings after starting to raise the fed-funds rate from nearly zero in March, making this the fastest rate increase since the 1980s. The Fed hadn’t increased interest rates by 0.75 points before June since 1994.

A market bounce was sparked by officials raising interest rates for a second time in July while also expressing increased worries about going overboard. Investor confidence regarding how rapidly inflation would drop also contributed to the market boom.

The Fed’s efforts to slow the economy and decrease price pressures were threatened by the rally, and Mr. Powell gave a direct speech last month in Jackson Hole, Wyoming, to emphasize the Fed’s commitment to doing so.

To limit further confusion, on Wednesday, Mr. Powell prefaced his answers to reporters’ questions with a disclaimer. “My main message has not changed at all since Jackson Hole,” he said.

Throughout his press conference, “what Chair Powell was trying to do was keep to a minimum the biggest risks to getting inflation to come down—which was market participants getting ahead of themselves and actually easing financial conditions,” said Vincent Reinhart, chief economist at Dreyfus and Mellon.

The chance that the Fed will raise rates excessively and send the economy into a recession increases as it does so. But Mr. Powell highlighted numerous times the importance of reducing inflation now in order to prevent a later recession that is far worse.

“No one knows whether this process will lead to a recession or, if so, how significant that recession will be,” he said. “We certainly haven’t given up the idea that we can have a relatively modest increase in unemployment. Nonetheless, we need to complete this task.”

In May and June, the economy slowed down, but through the summer, it seemed to pick up speed. According to Mr. Powell, the Fed wanted to see further proof that the labor market was cooling off on Wednesday. Over the previous six months, the economy has added 380,000 jobs on average per month, considerably beyond the 50,000 jobs per month that economists believe would maintain the unemployment rate at its current level.

While data on inflation haven’t gotten worse this summer, they also haven’t improved in the way that the Fed and many economists had hoped. Although total inflation decreased in July and August as a result of falling gas prices, rising housing costs and the cost of services like dental and medical care, haircuts, and auto repairs have kept inflation high.

In contrast to June’s gain of 9.1%, a four-decade high, the consumer price index increased by 8.3% from a year earlier in August. Mr. Powell cited how, despite waning supply-chain issues, inflation using a different gauge has persistently run at a rate of 4.5% or higher.

“That’s not where we expected or wanted to be,” he said. “Our expectation has been that we would begin to see inflation come down largely because of supply-side healing. By now we would have thought that we would have seen some of that. We haven’t.”

According to Fed experts, the unemployment rate will increase to 4.4% in 2019 from 3.7% in August and 3.5% in July. A recession has typically followed an increase of such size throughout that time period.

According to a number of analysts, including Ms. Meade and Ms. Uruci, it seems improbable that the Fed could reduce inflation to 3% next year and 2% by 2025 without further harming the labor market.

At the same time, Mr. Powell appeared to be more candid about the risks. “He is using words that are open to recession,” said Ms. Meade.

The potential of tighter credit has hurt the U.S. mortgage market, as the average 30-year fixed-rate mortgage increased to 6.25% last week from 6.01% the week before, according to data released on Wednesday by the Mortgage Bankers Association. It reached its highest point since October 2008. Loan requests to buy homes decreased 30% from the same week previous year.

Mr. Powell said it was likely the housing market, which boomed during the pandemic, driving prices to new highs, would weaken significantly. Mr. Reinhart said the admission was notable because the economy has always entered a recession when the housing sector has contracted.

“They want to convey that policy will be firm and that the economy will suffer as a result. It’s hard for them to say how much it will suffer,” said Mr. Reinhart.